Since the 2008 Financial Crisis, voters have removed the party in power in seven of eight federal elections. We believe that this increased political volatility is a direct result of the elevated economic uncertainty that has stemmed from the crisis. With midterm elections looming and inflation at 40-year highs, we believe this trend is likely to continue in 2022.

Wave elections, like we saw in 2010 or 2018, occur when one political party makes major gains in a single election. These events happen in a very systematic manner: 1) the president’s approval rating falls; 2) the opposition party becomes very motivated to vote in the upcoming election; 3) the party in power becomes dispirited, leading to depressed turnout; and 4) Independent voters move to the opposition party. We saw the first signs that the 2022 midterms would be a wave election during the 2021 elections held in Virginia and New Jersey. Historically, these two off-year elections have been good indicators of the following year’s midterm election results. In November 2021, voters in Virginia and New Jersey moved toward the Republicans by 12 and 13 percentage points, respectively. If the entire country moved at the same pace in the 2022 midterms, any district which voted for Biden by 13 points or less would be considered in play for the House, as would several Senate seats usually won by Democrats. Currently, all of the conditions of a wave election are present. The special election that will be held in Minnesota’s 1st district on August 9 will be an important indicator as to whether or not that trend remains in place.

Republicans are very likely to take the House. 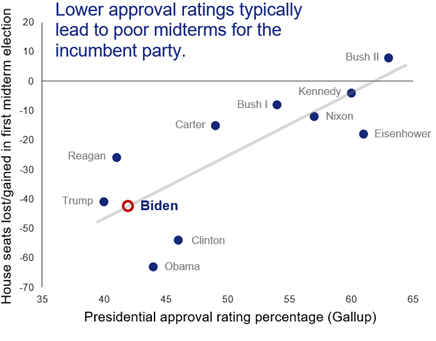 First midterm elections are referendums on the president’s first two years in office. As a result, the president’s approval rating is the most important metric for how many seats their party will lose in the midterms. On average, presidents lose 29 House seats in their first midterm election. In the wave election of 2010, Democrats lost 63 seats, and in the wave election of 2018, Republicans lost 41 seats. President Biden’s approval rating in the March Gallup poll stood at 42%, which predicts a 42-seat loss for the Democrats come November (Republicans need just a net five seats to take control of the House). This may shift, but the fact remains that a massive improvement in approval rating would be needed to get above water. Based on the current data, we anticipate a Republican wave in 2022, with Republicans taking control of the House. Bipartisanship will be required for legislation to move through Congress, regardless of which party controls the Senate.

In 2022, Republicans are defending more Senate seats than Democrats (21 vs. 14 seats), and are also defending more open seats, including in the swing states of North Carolina, Pennsylvania, and Ohio. Republicans need a net gain of just one seat in the Senate for the majority, and, on average, a president’s party loses one Senate seat in the midterms. The president’s approval rating is also important in the Senate races, as a low approval rating can put more seats in play, but it’s more important to watch which candidates secure each party’s nomination. Candidate quality is much more important in Senate elections than it is in House elections, which tend to reflect the national mood. We have seen in the past that weaker candidates can lead to a party losing a Senate seat that it should have otherwise won. Once the primaries have taken place, it will be easier to determine each party’s prospects for control of the Senate.

Geopolitical issues are an unknown.

President Biden’s approval rating started to decline following the US withdrawal from Afghanistan in 2021 and has not recovered as of this writing. Biden saw a small bounce in his numbers following the initial US response to the Russia-Ukraine crisis, but it was short-lived. Geopolitical issues are always a big unknown for elections, and both the length and the ultimate outcome of the war in Ukraine could have a big impact on voters ahead of the midterms.

Inflation is the largest voter concern. 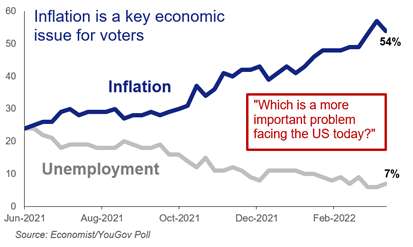 Inflation is unlikely to ease anytime soon as gas and other commodity prices continue to rise, partly as a result of the Russia-Ukraine crisis. Inflation will weigh on Biden’s standing among voters.

Presidents’ approval ratings generally decline between January and October of the midterm election year. President Biden’s approval rating was quite low at the start of the year, so it has room to rise, but that would likely require inflation to come down meaningfully, COVID to remain restrained, and either a resolution in Ukraine or a domestic rallying around the US position with respect to the conflict. This leaves a lot in the air as we move closer and closer to election day. 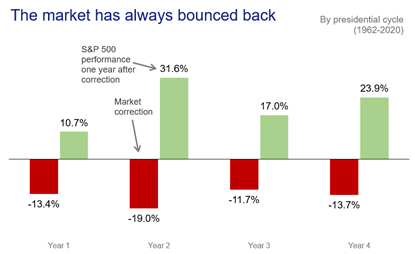 Historically, midterm election years are much more volatile for the stock market than non-midterm years. The average S&P 500 intra-year decline in midterm election years is 19%, as compared to just 13% in the other three years of the presidential cycle. We believe this is because 1) Presidents usually lose seats in midterms and thus try to motivate their bases (often with anti-growth policies); and 2) Investors begin to grapple with the uncertainty of a new party taking over. However, this volatility has also led to great buying opportunities: stocks have historically been up one year from the bottom by an average of 32%. In addition, the S&P 500 has not declined in the 12 months following a midterm election since 1946.