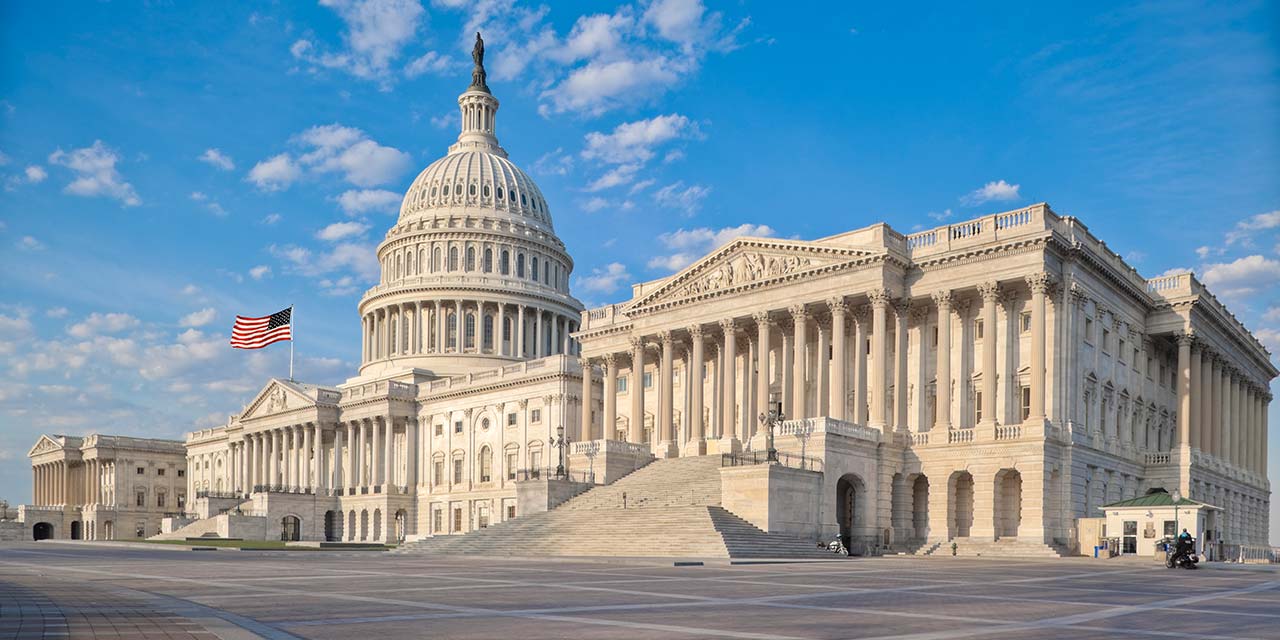 How are you seeing the current political environment?

Before we talk about the 2022 midterm elections, it’s important to understand the current political environment that we're operating in. The United States is undergoing its single greatest bout of political volatility since the end of the Civil War. We've had eight federal elections since the 2008 Financial Crisis, and voters have removed the party in power in seven of those eight elections. We've tried every party combination out there, and none have proved sustainable (further, we think it is very likely to become eight of nine elections where the power dynamic shifts in a few weeks). This all comes as inflation has completely dominated the financial markets’ attention this year and is also the single greatest issue heading into the 2022 midterm elections.

What is the framework you’re using to evaluate the 2022 midterms? 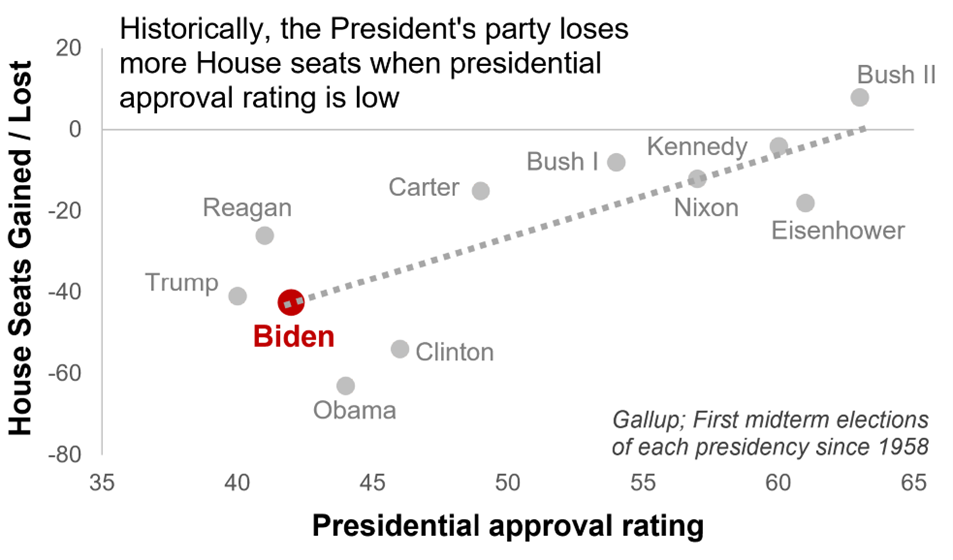 Midterm elections have historically been referendums on an incumbent president’s first two years in office. We know this because a president's approval rating is highly correlated to the number of seats gained or lost in their first midterm election; that is, as a president becomes more unpopular, they tend to lose more House seats. This is common – most presidents lose seats for their own political party in the midterm election, and in fact, there are only two presidents in the last 100 years who have actually gained seats in their first midterm (Franklin D. Roosevelt during the Great Depression in 1934 and George W. Bush in 2002 after 9/11).

This election was shaping up to be very similar to that historical pattern, but that shifted a bit over the summer as gasoline prices fell, the Supreme Court ruled on Roe v. Wade (prompting an increase in voter registration amongst Democratic women), and a few other key events occurred. We had five special elections in August for retiring members of Congress, and in those elections the Democrats did quite well. In fact, if the midterm elections had been held mid-August, the Democrats could have been closer to keeping the House. But that has again shifted in recent weeks. Since Labor Day, the issues that crystallized as most important for voters (seen in polling) started to square up with what the Republicans were campaigning on: gasoline prices, crime, and immigration. All three have been prominently pushed by the Republicans, and as a result, the Republicans have regained points in the polls. We also see undecided voters starting to break towards the party out of power, as is common in midterms. Our House model right now has the Republicans gaining 25 to 30 seats.

The Senate is less clear, with four or five races still within the margin of error. But as of today, the equity markets and betting odds are giving the Republicans a slight edge. And so, consensus today is about a 65% odds of a full Republican sweep, which is up markedly from 35% just three weeks ago. Of course, we're still two weeks away, so plenty could yet change.

What could bring a potential change to that outlook?

We're focused on a few areas that could change the odds between now and Election Day. First, the president has announced the release of an additional 15 million barrels of oil from the Strategic Petroleum Reserve. Gasoline prices are the single biggest factor in voter behavior this election, and so it makes sense politically to try to keep the price of oil down. We're also closely watching whether Donald Trump rises to the top of news headlines over the next couple of weeks. We've been keeping tabs on the story about whether President Trump has returned all classified documents and how the FBI may act on that information. We are at the six year anniversary of the FBI reopening Hillary Clinton's emails right before the 2016 election, and regardless of how you feel about that, it changed the conversation in the final weeks of that race. Should an event like that happen with Donald Trump, it could affect races.

What are the policy implications of the different midterm election scenarios?

There are really three election scenarios that can result from this election:

What are some of the big themes that you are watching outside of the midterms?

Regardless of the elections, we believe that our three frameworks for policy analysis – fiscal, monetary, and geopolitical – have all been upended. Obviously, the fiscal framework has been upset by the rising rate environment; as the interest cost on debt continues to rise, it will limit any future fiscal policy (both in terms of tax cuts and spending increases). In monetary policy, this is the first time in 40 years that the Federal Reserve has to actually get inflation out of the system rather than just prevent it. They must remain vigilant.

And finally, geopolitical. For the first time since the Berlin Wall came down, the US is looking at a more multipolar world. The threat of China and Russia together challenging the Western order has raised geopolitical risks, and US government policy is beginning to change as a result. We're starting to pay the semiconductor manufacturers to come back to the US, to do national security reviews on outbound investment, and more recently, to limit computer chip equipment makers from being able to do business in China. This is going to lead to a more bifurcated world. And with governments increasingly forcing companies and investors to choose sides, it feels very similar to the pre-Berlin Wall era in the 1980s. As a result, we anticipate these policy choices will lead to slightly higher inflation, slightly higher interest rates, and lower price-to-earnings ratios on stocks moving forward. This trajectory has been accelerating over the past two presidential administrations, and, therefore, we find it unlikely that a future president (regardless of party) will reverse it.

Strategas Securities, LLC is a registered broker-dealer and FINRA member firm, as well as an SEC-registered investment adviser. It is affiliated with Strategas Asset Management, LLC, an SEC-registered investment adviser. Strategas Securities, LLC is also affiliated with and wholly owned by Robert W. Baird & Co. Incorporated (“Baird”), a broker-dealer and FINRA member firm, although the two firms conduct separate and distinct businesses.

A complete listing of all applicable disclosures pertaining to Baird with respect to any individual companies mentioned in this communication can be accessed at http://www.rwbaird.com/research-insights/research/coverage/thirdpartyresearch-disclosures.aspx.

Policy implications of the November 8 midterms vary based on the election outcome scenarios. A good deal of uncertainty remains, particularly with regard to the Senate races. 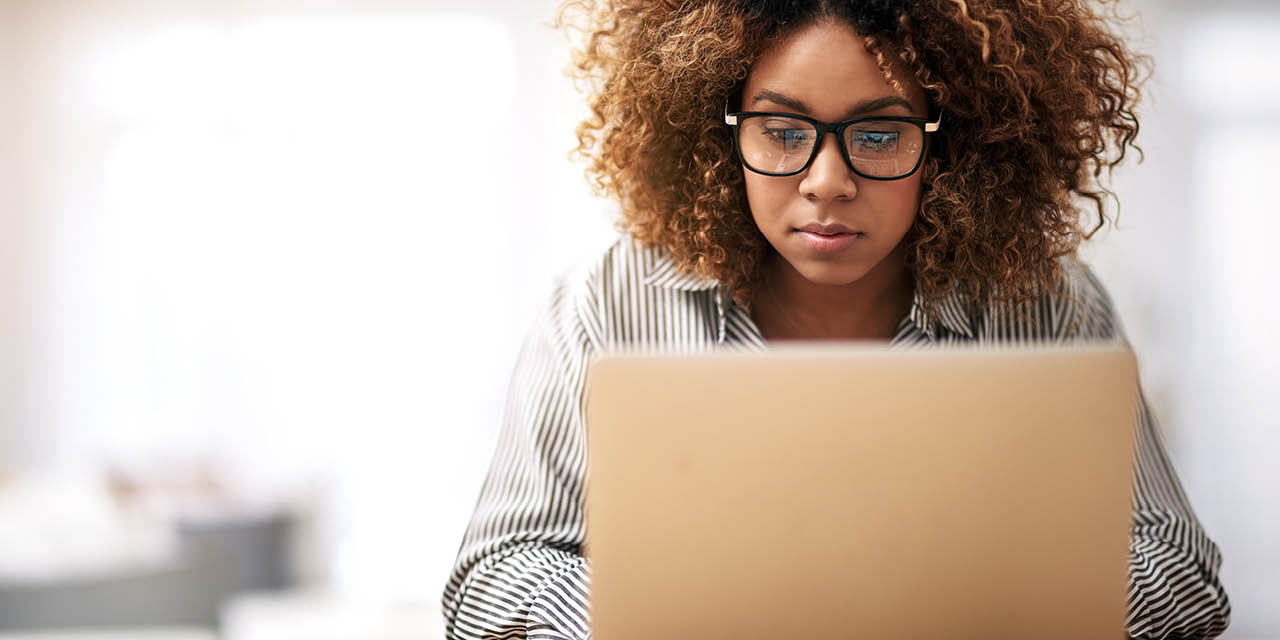 Investment Management
A Perspective on the Market – October 13, 2022

As we head into the last quarter of an uncertain, volatile year in the markets, Strategas CEO Jason Trennert addresses some of the pressing questions that Baird clients have been asking. 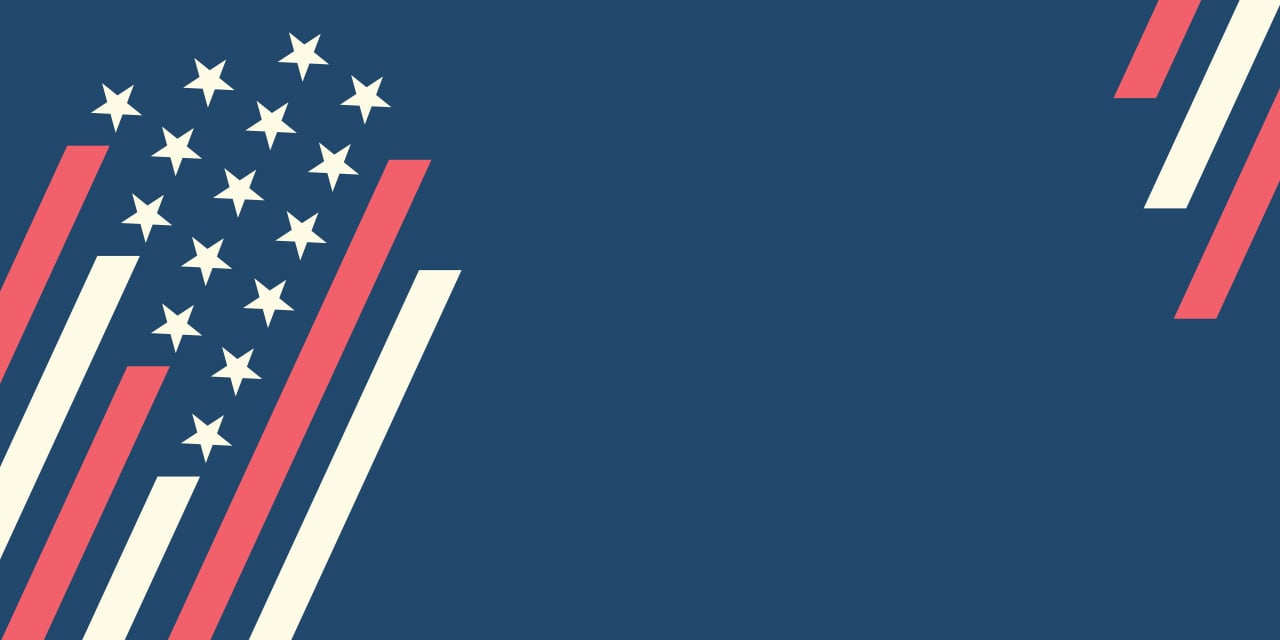